As a child, I grew up with lots of stories about dyeing. My French-Canadian great-grandmother, who lived to 106, used to make her own dyes. Her daughters worked in woolen textile mills in town, and would secret away scraps that my great-grandmother would dye for use in rugs and other home furnishings. I am lucky enough to have one of the rugs my grandmother made, using some of her mother’s homemade dyes in addition to upcycled wool from clothes and other uses.

The mint green wool in this rug comes from a suit my grandmother wore in 1945 when she took a train across the US to see my grandfather, whose ship came in to Seattle after World War II was over.

Dyeing is not a lost art, but it’s not exactly thriving either. I have no idea how my great-grandmother did what she did.

I experimented with RIT in high school – we made tie-dyed T-shirts and felt like hippies for about 15 minutes. We had no idea what we were doing. The dye came out in the wash and ruined other clothes. Fun times!

So when I saw a shibori dyeing class at the Creative Arts Workshop in New Haven, Conn. I had to sign up. The class was making four cotton napkins using different dyeing techniques. The instructor also allowed me to bring two yards of other fabric to dye for a top to other use. I was excited at the chance!

This was not a traditional class using real indigo dyes and twine and other techniques, but it was fun to try.

Here are the napkins I made:

The triangle motif at the upper right is my favorite of these four. It’s made by folding the fabric over twice and then folding it into triangles. The trick is your first triangle fold is actually a half triangle – necessary to get the triangles to align properly. We practiced on paper first:

The one at bottom right is made by making narrow pleats and then rolling the fabric into a bundle, like so:

The napkin at bottom left used a typical tie-dye technique of wrapping objects such as marbles within a fold of fabric and tying it off.

I covered the napkin with these little bundles – sometimes three marbles inside. The result came out like this fresh from the dye and rinse pots:

The fourth napkin did not come out well. This is what it looked like when it went into the die pot:

I think my popsicle sticks came loose or something, because the end is a bit blotchy. Oh well.

Finally, here’s my cotton poplin, to be a blouse for summer:

I had to break it into two one-yard cuts so it would fit in the dye pot. Also it was the end of the day so the color is a bit faded. I need to find a pattern that will allow me to use the dye pattern to best advantage.

3 thoughts on “Dying to Try Dyeing? Me too!” 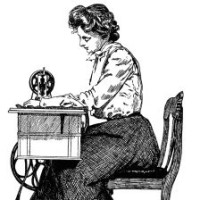 SHARING MY LOVE OF SEWING & OTHER HANDMADE GOODNESS

Lányos Handmade / Nice dress! Thanks, I made it!!

The Shop, The Blog and More!